Review of The Enchanted April

This 1922 novel finds a pair of English ladies planning to flee the rainy environs of London for a month-long vacation in Italy. The women are members of the same social club, but have never spoken a word to each other. Their first conversation ensues after they both see the same notice for a medieval castle on the Riveria.

When they learn the cost of the excursion, they realize they need two more women to share the costs. So the four of them (Mrs. Arbuthnot, Mrs. Wilkins, Mrs. Fisher & Lady Caroline) find their ways to San Salvatore.

The women have little in common, save that they are all struggling to make the best of troubled marriages. But their relative social standing, different worldviews, and diverse attitudes add enough conflict to add drama to the story. And yet they manage to achieve their goals of rejuvenation.

The ladies have such a good time that the married ones invite their husbands. Mr. Arbuthnot appears within a day of his wife’s telegram, which confuses her, until it is revealed that he was in fact invited by Lady Caroline, with whom he was conducting an affair.

And even the lovely surroundings cannot completely handle this level of drama.

Review of Searching For Sunday

Rachel Held Evans has developed a following for herself as a blogger and author. She is a leading voice of progressive evangelicalism and the current state of the church.

The structure of the book is terrific, arranged into seven sections corresponding to the seven sacraments of the Catholic and Orthodox churches (baptism, confession, holy orders, communion, confirmation, anointing of the sick, and marriage). This structure allows her to mix short reflective pieces with stories of others that reflect the theme, before moving to longer memoir pieces. This enables her to sustain a narrative, while also addressing a range of themes.

The most interesting part of the book for me was an episode I did not know about, her year-long attempt to plant a church with her husband and another couple. She discusses the struggles of this, and the pain of the effort’s failure. There was not as much “lessons learned” as I would have liked, but perhaps the wounds are still too fresh for Evans to have fully processed those events.

This is her most vulnerable and personal work, although all of her books have a good share of that material. Here, she talks about drifting away from the evangelicalism she grew up with, and then from the habit of churchgoing following the failure of the church plant. But it also recounts her return to church, her finding a community of believers where she can thrive. I’ll be interested in reading her future reflections on this new community, as I’m sure she will be writing about her experiences as time goes by.

Given the number of Millennials and Gen X-ers who have made church changes, or have become “nones” n recent years, I definitely think that this is a work that is “of the moment.” Evans speaks to the longings, disappointments, and issues of many young adults, and perhaps this book can help them process their own experiences.

As Sherlock Holmes’ popularity grew into the early 20th century, French novelist Maurice Leblance wrote stories featuring a protagonist equal to Holmes in every detail, except for the side of the law he operated on. The gentleman burglar and man of a thousand disguises was nearly as successful as the great detective, appearing in more than a dozen novels and almost 40 short stories.

This 1907 publication is the first collection of stories to see print, consisting of nine stories that saw print in periodicals in the few years preceding. The collection opens with two very storng stories, “The Arrest” and “In Prison,” showing how being in captivity merely gives the great thief the best alibi possible. It does not keep him from masterminding criminal acts.

Similar to Holmes, Lupin shows extraordinary skills in disguise, dressing up both himself and others when needed. His attention to detail and fast-moving mind help him commit crimes, and when his sense of justice is insulted, to deliver a criminal to the police. This “Robin Hood” approach aids to his legend among the Parisian populace.

The volume includes a story that actually features Holmes, and in it the two men are presented as near-equals. Of course, Sir Arthur Conan Doyle did not appreciate another author using his famous creation. The law was on Doyle’s side, so Leblance changed the name of “his” character to Herlock Sholmes. No, really.

Now that these stories have fallen into the public domain, Holmes’ name has been restored to the story for recent publications. I enjoyed these stories, although they did fall short of both Holmes and of Agatha Christie’s great detective, Hercule Poirot.

Almost ten years ago, Terry Goodkind brought to an end his 11-novel Sword of Truth series. I was satisfied with that ending, and thought the final three books in the epic series were very strong.

After producing one contemporary novel, The Law of Nines, Goodkind found himself drawn back to the characters that he wrote for nearly two decades. Branded “Richard and Kahlan” novels, he began a new series. And with Warheart, he (supposedly) has ended this second fantasy series. Once and for all.

At least for now.

In this finale, Richard and Kahlan face down the ultimate Evil that is coming to claim the D’Haran Empire. And at the start of novel, Richard is dead, lying on his funeral bier. So things don’t look good for the heroes. But since Kahlan was dead for a while in the last novel, the fact Richard does not stay dead in this novel is not a surprise.

Goodkind ends the series on a strong note, bringing in past characters where appropriate, and fulfilling Goodkind’s goals in writing fiction. He has strong feelings about notions of free will and prophecy and similar tropes of epic fantasy, and those themes come into play in the final resolution of the storyline.

I trust that Goodkind intends to not write more about these characters, but he has said that before. These remain among my favorite fantasy series, and if he chooses to revisit this world years from now, I’ll be here to read what he produces.

Source: public library
Posted by Alan at 9:47 AM 0 comments 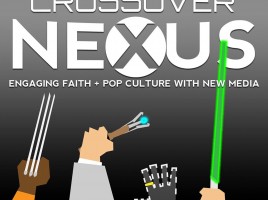 Over the last few weeks, I have had the privilege of appearing as a guest on some fine podcasts. There are a few more to be recorded and released in the near future, but here are two that have come out recently.

Luke Jaconetti invited me to team up with him on the excellent show, Long Play. In episode 15 of that terrific podcast, we spoke about the excellent progressive rock album The Turn of a Friendly Card, by The Alan Parsons Project.

I also recorded recently with a roundtable of hosts from the Crossover Nexus. We talked about our favorite holiday episodes of TV, as well as "made-up" holidays in sci-fi shows. Yes, we did talk about Life Day, but also Babylon 5's Day of the Dead!

I thank these podcasting friends for their hospitality. It is always a pleasure to podcast with such good buddies.
Posted by Alan at 6:05 PM 0 comments

My co-host (and offspring) Emily and I have been podcasting for over a year at Relatively Geeky, doing a variety of comic-book related podcast episodes on that i-Tunes feed.

A few months ago, we decided to add a new podcast to our portfolio, one focusing on religious themes and content in mainstream pop culture, mostly comics and other geeky properties. So far, we have done three episodes:

Episode #1: We talked about the Netflix TV series, "Daredevil," specifically the episode "Speak of the Devil," featuring a strong guest appearance by the character Father Lantom, one of the best priest characters on TV.

Episode #2: We talked about the long-time comic book character The Spectre, who in most iterations is the literal embodiment of God's Wrath.

Episode #3: In our first holiday special, we talked about a great Hanukkah story from a 1981 issue of Justice League of America. In this episode, we were also able to go over all of the wonderful feedback we've received from all of our wonderful listeners.

In addition to the podcast, Dorkness to Light includes a blog with regular posts, and an active Tumblr. Check them all out.