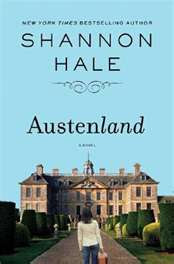 Again, a book that I am not the target demographic for -- but this one was not offputting in the least. It was a pretty fun read, all in all. It helps to have read the Jane Austen novels (I have), and even to be a fan of them (I am), and to have seen the BBC adaptation with Colin Firth (I have), and to be madly in love with Colin Firth as Mr. Darcy (I'm not).

Jane Hayes is a thirty-something single woman obsessed with Austen and Firth/Darcy, and feels that this obsession has negatively effected her dating life. In an odd turn of events, Jane is given a three-week vacation at a Williamsbug-like Jane Austen fantasy camp, complete with period clothing and balls, and actors playing Regency-era gentlemen.

Can Jane finally "move on" from her past and her obsessions to a healthy future? Or will she let herself fall for one of the men in Austenland? Or perhaps one of the actors?

The book moved quickly, and I found it a fun read. The ending chapters in particular were very strong.
Posted by Alan at 6:25 PM 0 comments 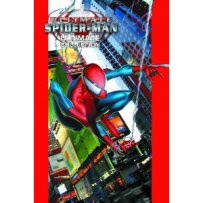 Back in the 1999-2000 time frame, Marvel Comics decided to "reboot" their entire universe of characters by creating an alternate universe, the Ultimate Universe. The first character to get this treatment was Spider-Man, and these trade paperbacks collect Ultimate Spider-Man issues 1-13, and then 14-27.

The entire run (all 133 issues) was written by Brian Michael Bendis, and this consistency of writing brings much coherence to the plotting and character development. Bendis takes a modern view on the character, keeps Peter Parker in high school far longer than Stan Lee did in the original run, and introduces Mary Jane as the main love interest much earlier.

These issues set a terrific tone for the series, re-telling the origin, as well as introducing key villains such as the Green Goblin and Doc Ock. This type of "alternate history" is interesting, as it combines our appreciation for the originial characters and situations, while allowing us to experience new version of all of these things.

This is my first experience with the Ultimate universe (confession: I am more of a DC guy), and I must say I was impressed. Both the art and the writing are top shelf.

Thanks to Jon Wilson & Zach Henderson for producing the terrific podcast, Teenage Wasteland. I picked up this trade so I could follow along with the first batch of episodes of their show, and will continue to do so. Much of my knowledge of the original Spider-Man stories, which is how I can compare and contrast the Ultimate take on the character, come from another Wilson podcast, Amazing Spider-Man Classics.

Check both podcasts out.
Posted by Alan at 6:14 AM 0 comments

So my DVR crashed a few days ago, and so my plans to take yesterday and catch up on my TV pretty much went out the window. But I needed something to do, as I did not have to go to work and it rained most of the day. So it sounded like a good day for a Podcast Listening Marathon! And here is what I listened to:

PrayStation Portable & the BreadCast Listened to these in bed. Morning devotions.

The Break w/ Fr. Roderick A nice transition into the real world.

The Adam Carolla Podcast Being tossed into the deep end of the real world. I appreciate Carolla's point of view, and much of his sense of humor, though sometimes the show can be a bit much for me.

Hope of All Trades #6 A girl geek talking about geeky things. This was Hope and 2 friends talking about how they felt about the novel Twilight. Along with me, they didn't like it. At all. I know it sounds incredibly condescending, but I do worry about women (especially adult women) who find positive messages in these books.

FourCast #70 The premise of this show is smart people kicking around ideas of what will happen in the future. This was a great episode, because the guests had the guts to admit they had no confidence whatsoever. It was refreshing, as the show (which I do enjoy) can sometimes get a little smug.

Superman in the Bronze Age #16 Charlie Neimeyer does a fine job reviewing Superman comics from the early 1970s.

Battleship Pretension #154 One of my favorite podcasts, the only film podcast I listen to. But it is not timely, not news-related, so I am not motivated to catch up on it. I am about a year behind.

Podcast of Ice & Fire #42 A good episode, wrapping up the first novel in the series, as well as covering news from the coming HBO series.

Mostly Photo I watched this one live. It is a video show, so catching it on full-screen matters.

Confessions of an Internet Addict #5 I follow Steph Smith on Twitter, but I took forever before listening to any of her podcasts. Again, I am years behind.

A Couple of Geeks #7 Married couple talking about gaming, TV, and other geeky things. A new offering from the Geekshow.Us podcast network.
Posted by Alan at 9:22 AM 0 comments

The Furies of Calderon, by Jim Butcher. Unabridged Audio. I've never read any Dresden Files novels, and it this point, the series is so large it's intimidating. But I know plenty of people who like Butcher's work, and I prefer epic fantasy more than urban fantasy, so this seemed like a solid compromise.

The people of the land of Alera have for thousands of years united against various threats. Their bond with the magical elemental furies of earth, air, fire, water, and metal have aided this effort. But now, as the heirless leader of the land ponders his future, he sends the envoy/spy Amara to a mercenary camp. She is betrayed, and in her escape runs across Tavi, a young sheep herder. And there the adventure begins.

Aside from the magic system, there was nothing especially new or unusual about this book. It stayed well within the guardrails fo traditional epic fantasy. There were swords, battles, magics, intrigues, and betrayals. The story in this novel was strong, and I appreciated both of the main characters and how they developed. This novel had an ending, but enough intrigues were left outstanding that it is clear where book 2 will pick up.
Posted by Alan at 10:36 PM 0 comments

In this oversized volume, artist Adam Hughes talks about the various comic book covers that he has produced for DC Comics. He is known mostly for works featuring female characters, most notably long runs on Wonder Woman and Catwoman. Many of his covers from these runs are featured and discussed.

The process of modern comics art intrigues me -- I did not know how much computer work was involved, for example. Artists are not always strong at describing their work and thier process, but Hughes does a pretty good job of this. And even as a layman, his discussions of color theory and other art concepts were readily understandable to me, and he has a pretty good sense of humor.
Posted by Alan at 10:53 AM 0 comments 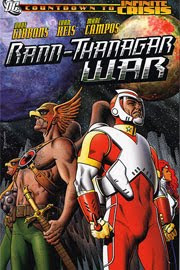 Certainly most of the comics I read are of the cowl-and-cape type. But I enjoy many of the straight science fictions comics, as well. The GL Corps and Adam Strange are among my favorites DC properties, and I also have fond memories of SF series from the 80s such as Sun Devlis and Spanner's Galaxy.

Now I am usually not a fan of the Hawkworld characters, but I am definitely a fan of Adam Strange, and dug into this tale with high anticipation. And I was not let down.

In typical modern comics storytelling, these six issues could have taken place over four, but then the trade paperback would not have been as salable. But the character development was solid, Gibbons plotting was very strong, and the depiction of the many battles were enjoyable. As a countdown event to Final Crisis, there are implications of this story that were felt across the DC Universe. But this volume works as a solid stand-alone tale, a good sci fi yarn.
Posted by Alan at 10:50 AM 0 comments

This is a place where the literary and podcast interests converged. Or intersected. Or something like that.

But both my dauhgter and I heard of this book within about a month of each other, via podcats. It may have been the same podcast, it may have been 2 different podcasts, I can't really remember. Slice of SciFi? Dragon Page? Geeks On? Escape pod? It was probably one of these shows, but I can't recall exactly which.

The book is a collection of Robinson's early stories about the magical pub where people (not all of them Earthlings) come to tell their stories. And engage in punfoolery.

The stories themselves are barely science fiction, but focus on character and have a point to make. The stories are a bit dated in their pop culture references, having been written in the mid-seventies, but beyond that (and beyond the puns) are some intriguing and interesting tales.
Posted by Alan at 1:14 AM 0 comments

Most of the books I have posted here are from one genre or another, there has not been a lot of literary fiction. But I feel I need to warn you, to prepare you, for the coming rush of comic-book related items that will show up here soon.

Actually, just my hobby. I have been a reader of comics for three decades, off and on. I don't buy new ocmics anymore, but I am a reader of numerous trade paperbacks and collections. And I consider that real reading. So I'll be posting them here.

And there are some terrific comic-book podcasts out there, and I'll be talking about those here, as well.
Posted by Alan at 2:20 PM 0 comments

The Winter Ghosts, by Kate Mosse. Unabridged audio. After reading Mosse's prior 2 novels, both of which were epic tales, it was nice to dip into a much smaller book. This is a dual-time story, mostly taking place in a post-WWI world, but with hints and episodes with characters from centuries before.

It could have benn an interesting story, but it moved quite slowly, and I found it not living up to the premise's promise.
Posted by Alan at 11:10 AM 0 comments 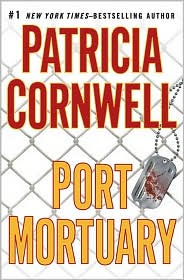 Port Mortuary, by Patricia Cornwell. Unabridged audio. I am a big fan of this series, and yes, there have been some bumps along the way, but I think they have generally stayed strong throughout. And this one is no exception.

Scarpetta is up in Massachusetts now, working for the state, and her past ties to the military are coming home to roost, as are some of her bad professional decisions. One of the strengths of the series is that the characters change and grow, choices have consequences, and she portrays lives moving on. I feel that in the 15 years I've been reading about her characters, they have all grown 15 years older.

The specific case in this novel involves Scarpetta's assistant, Fielding, and delves into some of the darker aspects of his past. There is military high-tech stuff, a plot that twists and turns, good suspense, and a satisfying conclusion.
Posted by Alan at 2:15 AM 0 comments