Teaser Tuesdays is a weekly bookish meme, hosted by MizB of Should Be Reading. Anyone can play along!
Just do the following:

From page 49 of Swords of the Six, a fantasy novel by Scott Appleton: "It's only rust, Mivere." "Rust, fairest of the dragon's daughters? Rust you say?" He raised his tiny fist, bent a narrow finger, and pointed. "Look again ... 'tis blood in that basin."
Posted by Alan at 8:52 AM 3 comments 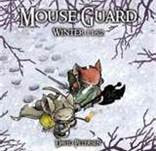 
After the rollicking high adventure of Fall 1152, things turn much darker and more dire for the Mouse Guard as the cold weather comes in. There and danger from above (owls and bats) and below (weasels). In the course of this volume, there is a major death, a romance blooms, and many battles are waged. At the end, the Mouse Guard's main mission is accomplished, but one gets the sense that not all is well in the land. Seeds for future stories have definitely been planted.

The relationships between the mice and their riding-hares was one of the few light spots in this volume, and came at a good point in the narrative. A story this intense and dark needs some funny parts.

Again, the odd shape of the pages makes Mouse Guard stand out among other graphic novels. This enables Petersen to operate within panels of shapes and sizes that other artists do not have access to. His art is beautiful, with many silent panels telling the story wonderfully without words.


This is the first book of Rawn's "Dragon Star" trilogy, the follow-up to her "Dragon Prince" trilogy.

In the first trilogy, High Prince Rohan established and then maintained his rule over the lands. His systems of laws and trade and treaties and marriages have made for a peaceful world. With the exception of Prince Andry and his school of Sunrunners, Rohan has no opponents. And even Andry's rebellion is not one of arms, it is simply one of rival power bases.

All of this changes when a mysterious and seemingly unstoppable invading horde swarms across the lands. Rohan and his son Pol lead the lands in their fight against the enemy, and even have to fight a few princedoms who throw in with the enemy. But their plans, horses, and men, even with the aid of magic and dragons, have trouble rolling back the incursion.

Rawn writes about military strategy in a way that is easy to follow, yet  complex and character-based. Her world is so grounded in a sense of place that it it logical for the different princes to have different priorities in the battle, and even different preferred methods for fighting the war. The huge cast of characters feels natural, and the way Rawn handles them is very skillful.

The last two pages of the novel are a terrific (pardon the cliché) game-changer.I have the next book in the trilogy, and will start reading it not too far in the future.

Disclosure: I received this book as part of LibraryThing's Early Reviewer program.


This YA biography tells the story of (as the subtitle says) "the secret co-creator of Batman."

The book is arranged around the 3 "secret identities" that Milton Finger employed during his life. First, he changed his name to Bill, which he thought would help him get work easier. Second, the fact that he was not credited as the writer of the earliest Batman stories, until DC Comics did so much later in reprints. And third, the fact that he should actually should be considered Batman's co-creator. This fact has never been formally acknowledged by DC Comics, due to language in Bob Kane's contract that required that he be identified as the sole creator.

This quick biography covers the highlights of Finger's creative life, including his tricks and techniques for coming up with so many comic book stories. As a fan of comics, I knew a bit of Bill Finger's life story, but this book contained many details that I had not previously heard. Nobleman is able to walk the tightrope of bringing appropriate attention to Finger without making Kane look bad.

The art style of the illustrations, done in an appropriately comic style, add to the sense of fun and adventure reflected in the text. This is a very accessible biography of a man whose contributions to pop culture are not as well known as they should be.

Teaser Tuesdays is a weekly bookish meme, hosted by MizB of Should Be Reading. Anyone can play along!
Just do the following:

From page 8 of Bill The Boy Wonder, a YA biography of Batman co-creator Bill Finger, by Marc Tyler Nobleman & Ty Templeton: "Wings aside, Bob's design  reminded Bill too much of Superman. Bill figured a character named after a bat should look menacing -- even though he would be a good guy."
Posted by Alan at 9:45 AM 2 comments

As soon as I join the Book Guys podcast as a semi-regular co-host, the show goes on hiatus.

Well, yes, it actually is a coincidence.

As Book Guy Paul posted on the blog & podcast site recently:
"Constant readers may have noticed we haven’t had a podcast episode released in a while. We’ve had some poorly timed technical issues involving Coca-Cola and some Apple products. Meanwhile, the new Book Mountain is under construction and Book Guys Show will return soon."

I will keep you posted!
Posted by Alan at 6:45 PM 0 comments

Summer vacation + nothing on the DVR = Podcast marathon! Yesterday I listened to:


Battleship Pretension: I am finally caught up with this show! The latest episode (#277), Tyler and David talked about the events they were planning to attend at San Diego Comicon.

The Wall Street Journal's Sport Retort: Despite the New York focus of some episodes, this is one of the best sports podcasts around. Released on Tuesdays and Thursdays, the 4 co-hosts consistently put out an entertaining and informative show.

Watching Before Watchmen: These special episodes, from the Around Comics feed, covers the weekly issues of DC Comic's "Before Watchmen" event. The latest episode covered the first issue of Ozymandius, and the two hosts had very different opinions of the story.

Golden Age Superman 031: Jon Wilson, with some help from Charlie Niemeyer, talk about the appearances of Superman from October 1940. They looked at Action Comics 31, as well as the radio adventures, the daily comic strips, and the sunday strips (which ran a different adventure from the dailies).
Posted by Alan at 8:30 AM 0 comments

I was surprised that the story began in the mid-1600s.  I was not surprised that the "modern" portion of the story took place in the World War II era, as it features the Earth-2 GL, whose adventures began in that era. FYI, this is Alan Scott, the GL who in the latest version of the DC Comics, came out of the closet. In this book, he is his "Old 52" self, complete with female love interest.

In the 17th century, anti-Green Lantern Malvolio seeks power on Earth, but is unable to accomplish his task. He hides the power rings and bides his time. This part of the book is a bit slow, but once the story moves to the 1940s, the pace picks up. Malvolio makes a pact with Hitler, and conquest of Earth appears realistic. The only man who stands in his way is Alan Scott, possessor of one of the “sleeper” rings. The World War II action of the story is strong, as is the final battle with Malvolio.

The out-of-sequence nature of the GL: Sleepers series is irritating. This is the second book, but tells the origins of the rings, the batteries, and the Guardians. At the very end of the book, one of the rings falls into the hands of Eddie "Roach," who is a key character in the first book! Clearly, this one takes place first, and yet this is consistently noted as the second book. That was disconcerting.

There is a spectrum of audio recordings, with single-voice reading at one end and full-cast audio play at the other end. Graphic Audio’s audio versions of DC Comics stories are very close to the latter. The presence of a narrator keeps some purists from calling these works true “audio dramas.” This works has a full cast of voice actors, sound effects and a musical score.