Podcasts I'm Caught Up On

There are many ways of categorizing podcasts. ITunes, for example, has sixteen. But to me, there are two important categories: ones I am caught up on, and ones I am not caught up on. And a third, I suppose, ones that have either podfaded or that I have otherwise dropped, but I'm only worried about the first two categories now.

There are many facts in determining which category a podcast falls into, including how recently I discovered the podcast, how old the podcast is, and whether the podcast covers current events.

Ones I am currently current on include: 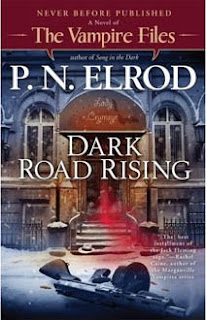 I don't read a ton of vampire novels -- my LibraryThing.Com account has 31 books tagged as such -- but I enjoy this series. The setting, gangland Chicago in the thirties, sets it apart. The books end up being part noir, part horror. It's a unique mix, and I like it.

This novel picks up where Song in the Dark leaves off. Main character Jack Fleming has just been in a bloody fight with his PI partner Escott that put Escott on the critical list, and the arrival of new vampire Whitey Kroun in Chicago has put Fleming on edge to a new degree.

This is a dark novel, as both Kroun and Fleming are put through a range of physical and emotional torture. But nobody picking up a vampire novel should be surprised by this. And the rough things the characters go through do serve their development and the overall plot structure. I could be wrong, but from what I can remember of the 11 prior novels in the series, this one is the first that includes POV sections that are other than Fleming's first person -- Kroun is given maybe 20% of the POV on the novel. That took a little getting used to, as it made the work less personal than the priod novels, but it enabled Elrod to take on a larger scope.

It's possible that this novel serves as the end of the series, as many things are wrapped up, and it ends with Fleming and girlfriend Bobbi heading out of Chicago. Whether the author is planning to pick up the series in the new setting I don't know. But if she does produce a new Vampire Files novel, I will be there to read it.
Posted by Alan at 8:19 PM 0 comments

This is probably my favorite ongoing series of novels. Each one is terrific; Five novels so far, each pushing the story logically forwards, and not a clunker among the bunch.

This is Novik's fifth Temeraire novel. These are historical novels that take place during the Napoleonic Wars, an era that is ripe for excellent tales -- I read the Horatio Hornblower novels as teen. The only little minor change that Novik makes to the historical world is that there are dragons. There is not magic, and I don't think I'd call these fantasy novels exactly. There are just an additonal type of animal in the world; Oh, and the dragons can talk.

This picks up the story after Temeraire's adventures in Africa, and her captain Will Laurance stands guilty of treason, for his actions in Book 4. There is a touch of redemption in this book, but the character arc that Laurence goes on is not that simple. Nor is the one that Temeraire is on.
Posted by Alan at 3:12 PM 0 comments

Well, I am in Central Ohio.

But on the Internets, I can be found at a few spots:

I keep track of books I read at Goodreads this is an excellent site, btw, and has a nice social and group aspect. Feel free to friend me there if you're a member.

I am also ProfessorAlan over at LibraryThing -- I still keep track of my books there, but found that the social stuff was stronger at GoodReads.

I am also @ProfessorAlan at Twitter.
Posted by Alan at 10:26 AM 0 comments

Our Kind of Traitor, by John LeCarre. Unabridged audio.

I admit that I skipped a few of LeCarre's books from the 2000s, after reading all of his first 15 or so novels. But the reviews for this one were strong enough to bring me back to this veteran author. This one is more of a straight espionage story, as opposed to the more political works he put out in the last decade.

The plot of this one revolves around planning the defection of the self-proclaimed "#1 money launderer in Russia" and his family to the UK, and the innocents who get swept up in this event. There is relationships, vacations, tennis, children, finance, and all the action you would want from a top-notch thriller.

The book was shorter than some of LeCarre's more recent works, and this 10-20% trimming keeps the book moving at a nice pace.
Posted by Alan at 3:12 PM 0 comments

What I Listened to Yesterday

I got snowed out of classes, and didn't have much TV queued up, so yesterday was a major podcast listening day. Here is what I heard:

The BreadCast & PrayStation Portable -- these are part of my morning devotions.
Jen & DAVe Show #304 -- I am almost caught up. Me & my family lurve this show.
DH Unplugged #95 -- If the market crashes next week, you heard it there first.
The Tony Kornheiser Show -- live stream from this Washington DC sports-y radio talk show.
No Agenda #271 -- live stream, via the excellent Pocket No Agenda app.
Adam Carolla Show, with guest Patton Oswalt
PodCastle #107 -- The Behold of the Eye, by Hal Duncan.
From Crisis to Crisis: A Superman podcast #81 -- great episode, great show.
Tech News Today -- live stream via the TWiT.TV app
TV Critic Podcast Channel -- The Wire season 2
Writing Excuses -- latest episode, all caught up
PrayStation Portable -- evening devotions
Posted by Alan at 11:34 AM 0 comments 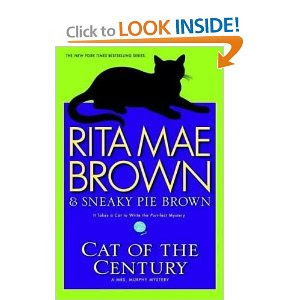 I'll be honest, it was the cats that drew me to this series more than anything else. Sure I like mysteries on occassion, but I am not addicted to them like many mystery fans are -- my Mom, for example, probably read 200 mysteries a year, and very little else. I am not like that. I need a hook.

And the hook for me was the cats, and now that I am firmly entrenched in the series (I have not read the first 4, as I have been able to find them on audio), I'll keep reading them.

This one was fine, the mystery had a financial aspect to it that Brown had a good handle on. But the story was bifurcated, taking place in 2 locations, and many of the regular characters were little more than cameos. If that. So it wasn't the strongest of the series, but it generally delivered what I expected.
Posted by Alan at 10:29 AM 0 comments 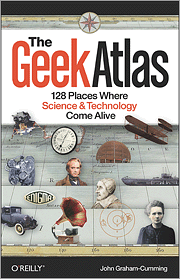 This is a travel guide to 128 (a key number in binary) science-related tourist sites around the world. Each one is described in 2-4 pages, including sidebars about the related science.

I am more of a sci-fi geek than a science & tech geek, so I skimmed over much of the higer mathematics portions of the book. But my layman's knowledge of and interest in tech & science helped make the book a fun read, but its audience is definitely limited to science & tech geeks.
Posted by Alan at 10:20 AM 0 comments 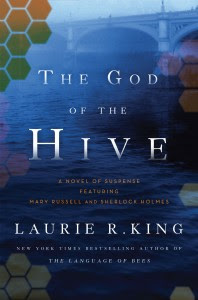 God of the Hive, by Laurie R. King. Unabridged Audio.

Among the first "grown-up" stories I remember reading as a young person were the Sherlock Holmes stories, and the singe-volume Complete Sherlock Holmes has been in my possession for more than three decades now. We've given away plenty of books over the years, but this one has followed me everywhere I've gone.

I have dipped my toes into a few "extended universe" Holmes works, but this series by King is the one I've ejoyed the most. Focusing on an older Holmes and his young wife/protege Mary Russell, the series has developed into an enjoyable character study. Holmes is not the main character, as they are told from Russell's POV, and they are separated for much of the novel, but King extrapolates an older Holmes that is believable.

This latest entry in the series is not the strongest of the series, but it was a satisfying read.
Posted by Alan at 11:50 AM 0 comments

The purpose of this blog is to keep track of the books I read, and the audio I consume, which is made up of both unabridged audiobooks, podcast novels, and podcasts.

I started keeping track of my reading a few years ago via LiveJournal's 50 Book Challenge community. I then moved my book lists to both LibraryThing and GoodReads, and used another blog to track my annual reading, but I wanted to use that blog for another purpose, so the idea of segregating out my reading interests to a separate blog made sense. And I listen to a ton of podcasts, as well as audiobooks, so bringing those interests together also made sense.