To many, Timothy Zahn's "Thrawn" series represents the best of the Star Wars expanded universe novels. In this one, he returns to the franchise to tell a story from a few years before the events of those stories.

Scoundrels takes place in one of the most interesting (and generally unexplored) time frames in Star Wars, the time between the first and second movies. The Death Star has exploded, but the Empire is still in place, and although there is a rebellion brewing, many of the people in the universe have been relatively untouched by that war. The Universe is a big place, and Zahn's novels set in this time frame simply use the war as part of the backdrop. His focus, especially in Scoundrels, is on characters.

This novel is a basic caper / heist story, similar to Ocean's Eleven or the TV show Leverage. Han Solo and Chewie are on the run from Jabba and the bounty hunters he has hired to find him. He is roped into a scam that will "liberate" enough credits to fully pay off that debt. But in assembling his team, he realizes that he needs to include his old buddy, Lando Calrissian. That would be OK, except that the pair's last meeting ended with Lando saying he never wanted to see Han ever again.

The plot itself is fine, but that is not what this book is about. It is about Han, Chewie, and Lando, as well as the other characters that Zahn introduces. None of these stand out as much as does Mara Jade, who he created for the Thrawn novels. But Rachele Ree, the obligatory tech whiz, and the twin thieves Bink and Tavia are all interesting and well-drawn.

There are only the very briefest references to Luke and Leia, and these serve to build the bigger universe. Overall, this book did what it set out to do -- it tells a fun yarn, in a universe we know, with characters we love.

Members of my little podcast network (me and m daughter) have been busy appearing as guest on other people's shows. Check these ones out:

I appeared as a guest on episode 141 of Back to the Bins, where I talked about the excellent private investigator comic book The Maze Agency.

Emily and I both appeared on episode 143 of Back to the Bins, where I talked about an issue of Doom 2099 (maybe my favorite comic series of all time), and she talked about the first issue of Corum, a tie-in comic to the Michael Moorcock fantasy novels.

Emily then went out on her own, and appeared on Michael Bradley's excellent Superman & Batman podcast, in which they talked about the legendary (for better and worse) Saga of the Super-Sons, on episode 13 of that show.

And she is going to appear on another podcast soon, as well.
Posted by Alan at 7:42 PM 0 comments

Teaser Tuesdays is a weekly bookish meme, hosted by MizB of Should Be Reading. Anyone can play along!

From Chapter 2 of Star Wars: Scoundrel , by Timothy Zahn.

"Han Solo had never been in Regillio's Cantina before. But he'd been in hundreds just like it, and he knew the type well. It was reasonable quiet, though from wariness rather than good manners; slightly boisterous, though with the restraint that came from the need to keep a low profile; and a dilapidated scruffiness, with no apologies offered or expected. It was, in short, the perfect place for a trap."
Posted by Alan at 2:00 PM 0 comments

Mitch Shelley is known as the Resurrection Man, and has a very interesting power. Each time he dies, and he dies regularly in this title, he returns to life with a different superhuman ability. Sometimes he can control shadows, sometimes he can shoot beams from his eyes. But the change only comes after he dies.

In this volume, Shelley finds that he has a compatriot – a psychometric private detective named Kim Rebecki. Originally hired to just find Shelley, she finds herself drawn to him, and chooses to help him instead, going rogue against her powerful client. Shelley is eventually brought to the leader of the organization who created him, and that leader is … well, it’s him. Abnett and Lanning are able to make sense of this strange circumstance, which is a testament to their skill as writers. The resolution of this plot was very well executed.

The inclusion of the Suicide Squad made sense in the context of the story, and the crossover issue was strong. Both the art and writing in that issue were close enough to the main comic that reading those stories in one volume was not disconcerting in the least.

Death has profound spiritual consequences, even in the comic book world. Both Heaven and Hell believe they have a claim on Shelley’s soul, and his continual revivals have drawn the notice of both sides. Both angels and The Evil One are after him, and both have made him offers that are hard to refuse. How this part of the story wrapped up was also satisfying.

This title was cancelled after the zero-issue was released, after a year near he bottom of the sales list among “new 52” titles. I thought it was an interesting title, and I’m glad that DC Comics gave an oddball title like this one a shot.

The podcast Dinner 4 Geeks is truly a one-of-a-kind show. The four hosts, Scott, Ron, and the other two, meet weekly at a restaurant in or around Brunswick, Georgia, and record their conversations. Sometimes there is a sort-of agenda or plan, sometimes there isn't. But what comes out is always interesting.


Well, in episode 57, they did their annual Wookie Award episode. In addition to soliciting listener feedback for the best things that happened in 2014, the 4 geeks also related their favorites. In addition to saying very nice things about the podcasting venture that my daughter and I got going last year, they also mentioned this blog in particular as one of their favorite places on the Web!

In addition to that, both Scott and Ron have said nice things about our podcasts on Facebook, as well. Ron has even sent us email feedback that we have read on the show.

Go check them out at the Two True Freaks website or via iTunes. It's a fun show, with conversations covering a diverse range of things that fall under the broad category of "geeky."
Posted by Alan at 2:11 PM 0 comments

Army officer Oscar Britton is a loyal serviceman, doing his job well, and taking pride in his work. Part of the Supernatural Operations Corps, his mission is to bring order to a world gone mad, by tracking down people who abruptly manifest strange magical powers.

Then he abruptly develops a rare and prohibited magical power, and he knows what is coming next -- his former colleagues in the SOC will hunt him down, and take him out. Like many, Britton flees. His actions change him from loyal government agent to public enemy number one.

I am not overly familiar with military fiction. I have not read a lot of it, but this genre-mashing "military fantasy" novel was a premise that I could not resist. And Cole clearly knows his stuff, and his background as a military man and government contractor are obvious. The military action, and there is plenty of it, is detailed and has the ring of truth to it.
The plot itself did not grab me, as I did not see that there was an "end game" to it. It just seemed more like a series of set pieces than a story that was going to a particular place. But although the story itself did not grab me as much as the world-building did, the world-building was strong enough for me to make we want to track down the second book in the series.
Source: Public library. I discovered this novel by listening to Mur Lafferty interview the author on her excellent podcast, I Should Be Writing.
Posted by Alan at 4:57 PM 0 comments

Last day of Spring Break = Podcast Marathon!  Here is what I listened to yesterday:

The Tony Kornheiser Show: Probably my favorite show. Sports and local news, from Washington DC, a city 500 miles away from me.

This Week in Tech: Leo LaPorte, John C. Dvorak, and a few other tech writers kicking around the week's technology news.

Star Trek Monthly Monday: One of the mainstay shows of the excellent Two True Freaks network, hosts Scott Gardner and Chris Honeywell talked about the original series episode "For the World is Hollow and I Have Touched the Sky," as well as a really bad Star Trek comic book.

In Country: Host Tom Panarese does an issue-by-issue review of the Marvel Comics war book, The 'Nam.

I lost track of the specific of her career over the years, other than the vague notion that she put out a critically-acclaimed album a few years ago. That album, Before the Daylight's Shot, in fact won a Grammy Award in 2008 for Best Rock Gospel Album.

But I knew nothing about her life. This book fills in all of the gaps. Raw and vulnerable, Cleveland details her troubled upbringing with disconnected parents, and her own struggles and addictions. Even as she was winning Grammy winner in the Gospel music world, she was an alcoholic and addict.

The nice thing about memours by songwriters, is that they tend to be very good writers, and Cleveland's skill with words and images are obvious in the writing. She has come to a nice place in her life and her career as she approaches 50, and she hopes all her worst days are behind her. But as she details in the book, every day has its own struggles, and its own little victories.

Source: A group on Facebook posted that this book was free for a few days through the Nook store, and I grabbed it during that window of opportunity.
Posted by Alan at 11:58 AM 0 comments 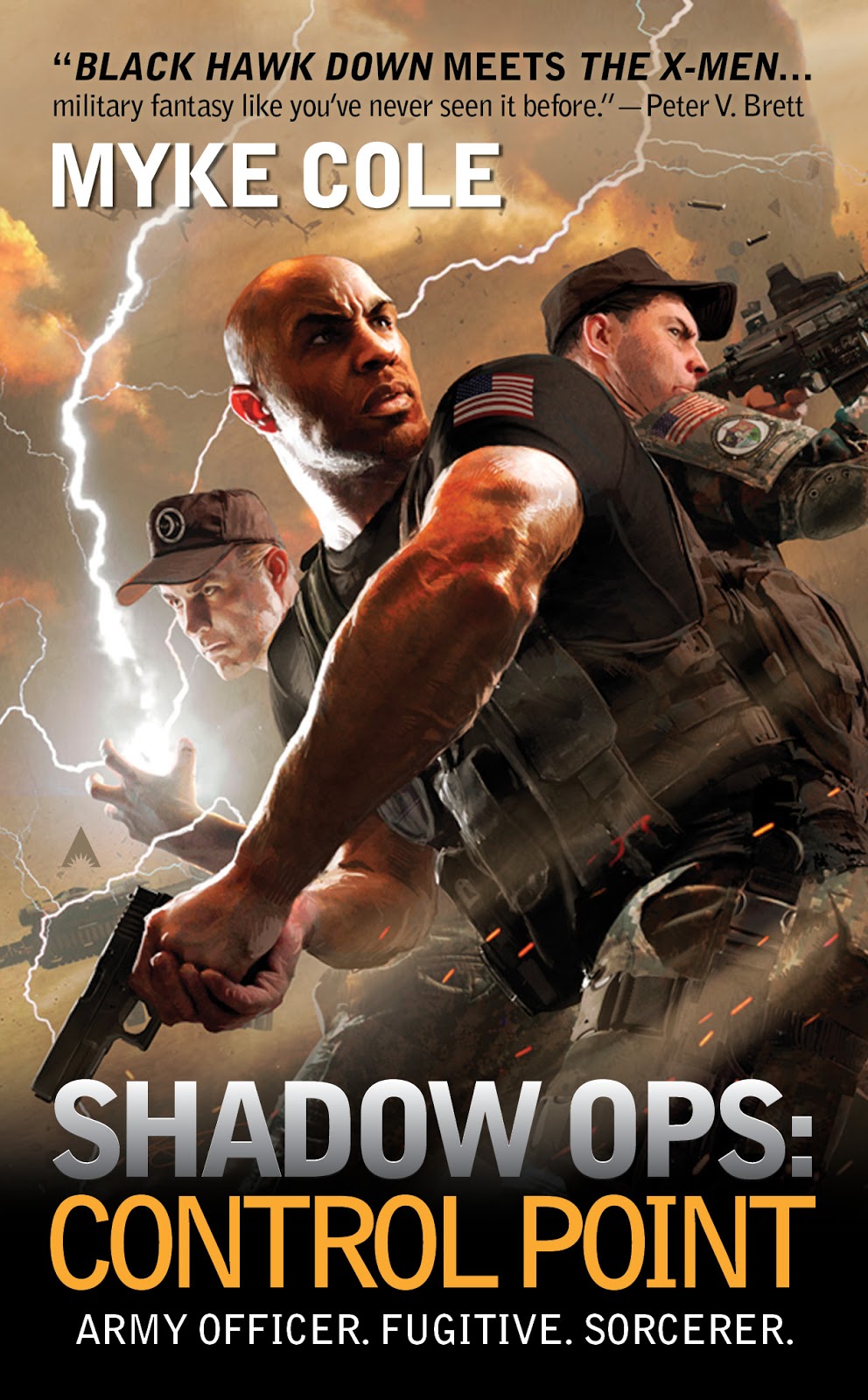 Teaser Tuesdays is a weekly bookish meme, hosted by MizB of Should Be Reading. Anyone can play along!

From Chapter 6 of Shadow Ops: Control Point , by Myke Cole.

"You're latent. You're a probe. You're not in control of your magic. The Army has rejected you. You killed your father. Your mother is terrified of you. You're a fugitive."
Posted by Alan at 2:28 PM 0 comments