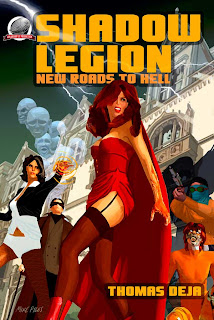 The Shadow Legion: New Roads to Hell, by Thomas Deja.

This is (potentially) the first book in a new series of superhero novels. This one has a very nice noir feel, taking place in the early days of radio heroes.

New Roads to Hell is set in Nocturne, Florida, "the city that lives by night." An entertainment mecca with a dark side and a history of spiritual darkness, it becomes the battleground for a ghostly and ghastly turf war. The cast includes Dreamcatcher, Nightbreaker, Ferryman and Black Talon, and in this novel they go up against the evil Rose Red. I am a particular fan of Black Talon,who possesses the ability to morph at will between a range of African predators. The squeezing powers of a python, the size of an elephant, and the speed af a cheetah are all at his disposal.

As an "origin story" for the team, this story does what is supposed to do -- it makes me wish there was another one out there that I could read right away. Each chapter also contains an art piece that brings a sense of excitement to the novel, as well as reminding us of the comic-book nature of the story.

Deja's writing is strong, and his characterizations are solid -- each of the main characters have their own distinct motivations. The book moves at a great place, and was a very enjoyable read. There is a distinct ending, but the groundwork is certainly been laid for new adventures in this universe.

Source: Directly from the author, to prepare for an interview we conducted with him on The Book Guys Show.
Posted by Alan at 12:52 PM