Review of The Keeper

Book #37. The Keeper, by David Baldacci. Unabridged audio.
This is Baldacci’s second YA novel featuring the character Vega Jane. Picking up where the first novel (reviewed here) left off, Vega and her buddy Delph have successfully escaped her hometown of Wormwood. They have entered the mysterious Quag, which is not the empty space that she was taught it was, and there may even be a land beyond the Quag. There might even be freedom.
But the Quag turns out to be worse than she ever thought it could be. The pair need to battle bloodthirsty beasts of all shapes and sizes, as well as go up against darkly magical forces. They run across another pair of youngsters in the Quag, unsure if they are enemies or allies.
This story certainly had its share of drama and action. There was a death among our main cast, a necessary sacrifice in the battle, but one that I did not expect. But there were way too many similarities to Harry Potter for my taste. For crying out loud, the lead character has a wand and speaks pseudo-Latin to achieve her magical goals. It became hard not to laugh every time this happened.
I enjoy most of Baldacci’s adult novels, and these ones are fine enough, but they just weren’t nearly as good as they could have been. There wasn’t enough original in the story and storytelling to make it a fully satisfying reading experience.
Source: Hoopla
Posted by Alan at 11:07 AM 0 comments 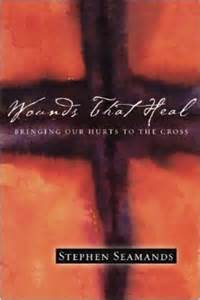 Teaser Tuesdays is a weekly bookish meme, hosted by MizB of Books And A Beat. Anyone can play along!


Grab your current read.
Open to a random page.
Share two (2) “teaser” sentences from somewhere on that page.

From Page 31 of Wounds That Heal, by Stephen Seamands.

"Jesus knew the sting of rejection throughout his life. He was born in a smelly stable, forced to flee the country, treated with contempt by the religious establishment, spurned in his hometown and even despised by his family."
Posted by Alan at 9:57 AM 0 comments

(*) covering the stories that have been discussed by Ruth & Darrin Sutherland in the first 5 episodes of their excellent Xenozoic Xenophiles podcast.
Posted by Alan at 8:29 AM 0 comments

Review of Confession of an Introvert

Book #36. Confessions of an Introvert, by Meghan Wier. Paperback.
The subtitle of this book is “The Shy Girl’s Guide to Career, Networking, and Getting the Most Out of Life.” I was immediately concerned by the phrase “shy girl.” Not because I’m not a girl, but because I was concerned that the author may have conflated “introverted” and “shy.”
A lot of attention has been brought to Introversion in the last decade or so, including the great book “Quiet,” by Susan Cain (reviewed here). Despite that, many people still make the mistake of treating “introvert” as a synonym for “shy.” But Wier quickly showed me that she knew the difference, recognizing that the words are similar, but not synonymous.
The book contains a lot of good networking and business tips, whether one is an introvert or not. Certainly, some of the tips are directed to that group, but many of her tips would be effective for a broader group of people. The advice ranges from the philosophical to the very practical.
I recommend this book not just for introverts, or not just for people interested in networking or management advice. There is a lot of information in this book that will help extroverts understand the introverts in their life, whether they work with them, manage them, or are married to one.
Source: my wife purchased this book a number of years ago. I don’t know from where.
Posted by Alan at 12:06 PM 0 comments

Over the course of the last few weeks, I was able to appear as a guest on some great podcasts, hosted by a couple of great podcasting buddies. Here are two that recently came out. I attended Baltimore Comic-Con over Labor Day weekend, as did Tom Panarese. He asked me to appear on episode 67 of his excellent Pop Culture Affidavit podcast, to talk about our experiences at the con. We discussed who we saw, what we had signed, and our favorite cosplays.

Fear the Walking DeadCast. This is a show that I showed up on a few times during the current season. On the season 2 finale recap episode, I joined main hosts Scott McGregor, Beth Hughes & Brian Hughes, and also Sara Tonin and Mike Zummo. The six of us picked over the final 2 hours of the second season of Fear the Walking Dead. Complete with zombie sound effects!

BOOKS:
The Keeper, by David Baldacci, pages 1 – 208.
Confessions of an Introvert, by Meghan Wier, COMPLETED.

I noticed that a number of podcasts that I listen to have recently hit major "big round number" milestones. Including.

Father Roderick, the "podcasting priest" from Holland, recently celebrated the 1000th espiode of his podcast "The Break." In the time since his first episode nearly a decade ago, he has developed his SQPN organization into a network that

Episode 200 of the Danger Room podcast is coming soon. At this point, Adam and Jeremy have reviewed and commented upon every issue of the X-Men from #1 (form 1964) to #192 (form 1985). They have also talked about other mutant books, such as Dazzler.

My good friends from across the pond, Stephen and Andy, have been producing the excellent Fantasticast podcast for 4 years. They had exercised the poor judgment to have me on a few episode on the show, as well as having my podcast partner and daughter Emily on a few times. But they have overcome those questionable decisions, and episode #200 is scheduled to come out in a few days.

About a month ago, the Strangers & Aliens podcast released their 200th episode. The hosts counted down their 200 favorite stories, 50 each from books, movies, TV, & comics -- and they included listener suggestions, including one from yours truly. The episode was so long that they split it into two parts, and each one was a good listen.

BOOKS:
Confessions of an Introvert, by Meghan Wier, pages 103 – 170.
The Case for the Psalms, by N.T. Wright, COMPLETED. Review here.